This beautiful Trench Art Zippo belonged Bedford S. Roberson Jr., also known as "Smitty". He was born on 30 April 1922 in Greensboro, North Carolina, and was throughout WWII as a Technical Sergeant in the 474th anti-aircraft artillery battalion. He died January 2011 because of complications from surgery.

The SS runes are probably from one of the SS honor dagger. This emblem is from a killed SS-Officer. The Hakenkreuz emblem was probably from a member of the Foreign Hitlerjugend and is probably very rare. The other two are badges of his own unit

The 474th anti-aircraft artillery battalion was a part of Operation "Overlord". This operation also included the D-Day. They landed on 06 June 1944 in Normandy in the "Utah Beach".

The battalion was a mobile air defense unit and defend the ground troops against German air attacks. Alone on D-Day the soldiers from the 474th anti aircraft artillery battalion shot down, under heavy enemy fire, 5 German planes.

On 01 July helped the unit to capture the French town Cherbourg and set up their headquarters in a former prisoner of war camp.

On July 31, they were involved in the battle of the Falaise Gap and breakthrough in the town of Saint Lo. They also shot down a V1 rocket (in the GI's colloquially called "robot bomb") on the same day. That was for a mobile air defense a masterstroke, because the rocket flew about 900 meters with a speed of 390 miles/h.

On 07 March 1945, they crossed the Rhein at Köln and liberated on 11 April 1945, the people in the concentration camp Nordhausen.

In this letter he recounts the horrific events and conditions in the concentration camps. He also writes that he now has no more understanding of the Germans and his anger grew. He was at that time 23 years old.

The 474th anti aircraft artillery battalion moved further in direction to Berlin and were on May 6, 1945, 50 miles from Berlin. Later, the unit was part of the occupying power. 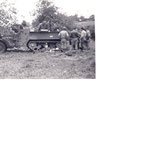 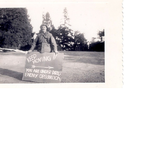